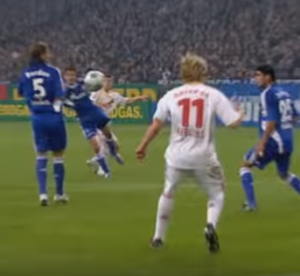 The German Bundesliga consists of a season that runs from August until May every year. There are eighteen teams in the top flight of German football, and they each play in a home-and-home series against every other team in the league. Each team plays seventeen home games and seventeen away games every season for a total of 34 games.

The teams that finish in the bottom two of the table are relegated from the Bundesliga. The team that finishes in the place third from the bottom faces off against a team in the second division to determine who gets to play in the league the following year. For simplicity, the percentages of relegation include teams that will fall in the bottom three of the table and do not take into account the probability of the 16th place team winning the play in to stay in the top-tier league.

Below, we simulated out the season 5,000 times. For our individual game projections, see: Bundesliga Game Predictions. Also, see our simulations on the current seasons of Champions League and Europa League.

December 22nd, 2017: Now seventeen games into the season, and one thing is practically certain. Bayern Munich will be the champion and return to Champions League. FC Koln appears to be all but relegated already. The real battle is from second to eighth place with seven teams all within two points of each other. That should make for an interesting race in 2018.

October 30th, 2017: Ten games into the Bundesliga season, there is not much of a change at the top of the standings compared to what we expected in the preseason. Perhaps, the biggest disparity between now and the preseason is in Hannover whom we now project finishing around the 12th spots versus at the bottom of the table in the preseason.