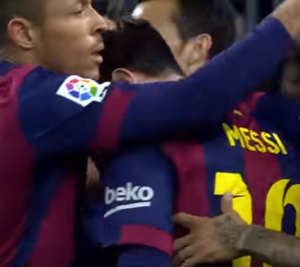 Currently, Spain has UEFA’s highest team coefficient and thus gets 4 teams into Champions League and 2 teams into Europa league. These places are determined based on the final standings in the La Liga regular season.

Below, we simulated the season 5,000 times. For our individual game projections, see: La Liga Game Predictions. Also, see our simulations on the current seasons of Champions League and Europa League.

November 15th, 2017: Barcelona is off to a sizzling start accumulating 31 points in their first eleven games. With this early hot start, they have jumped from a 29.2% chance to win the league to a 79.5% chance.