March Madness is in the air! With all of the teams now seeded in the field, we are back with our 2019 NCAA Tournament breakdown! As always, our updated individual game predictions can be found here. When the Sweet Sixteen gets here, we will add the updated odds of winning for each team.

Virginia becomes the odds on favorite to win the tournament as they draw the weakest opponent left in the field. Even in 1,000 simulations, we don’t have Oregon winning one time. They are nearly 4:1 underdogs in their Sweet Sixteen match against Virginia and would be heavy underdogs against every team left in the field. Duke has our second best odds to win the tournament at 15.4%. 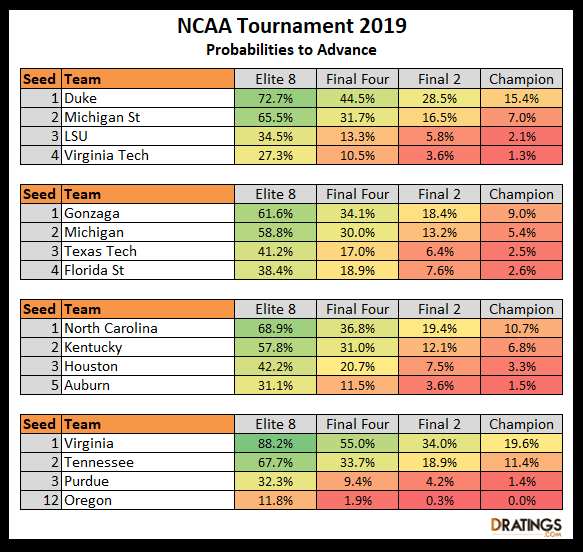 The clear headliner and favorite to win the NCAA Tournament is Duke. Our simulation gives the Blue Devils a 27.9% chance to win the tournament, but their path may not be as easy as it seems. The 4-seed Virginia Tech is likely to have their best player back in Justin Robinson after missing most of ACC conference play. We think Michigan State is the top 2-seed in the tournament and they could also give Duke some trouble in the Elite Eight. 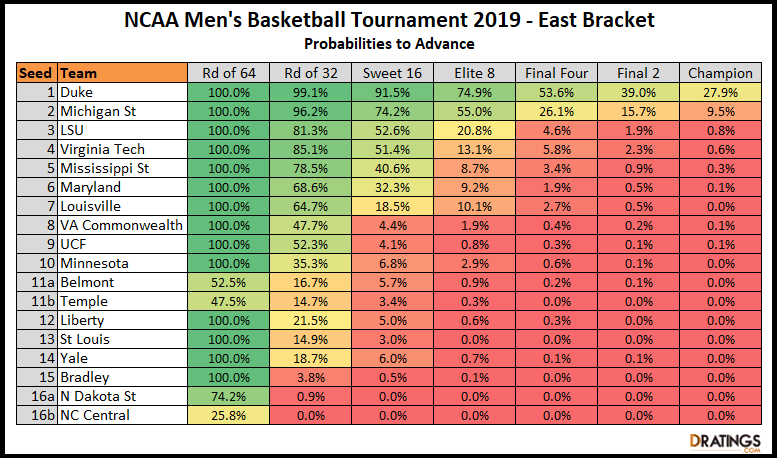 Virginia has our 2nd highest odds to win the NCAA Tournament at 12.1%. We also have the Cavaliers as the likely winner of the South with a 42.4% chance of making the Final Four. There really isn’t a ton of excitement in this bracket as the chalk is projected to win every match in the Second Round. We do see a potential interesting match up in the Third Round as #5 Wisconsin should be a slight favorite of #4 Kansas State. 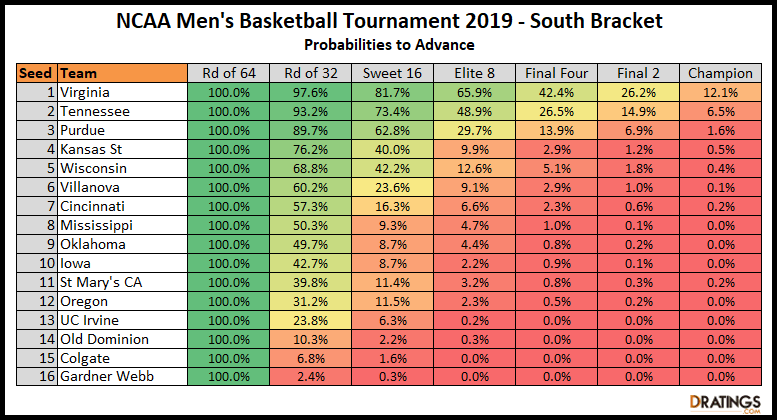 The Midwest Bracket might be the most competitive bracket of the four. An argument can be made that Kansas, Auburn, Iowa State, and Wofford all should have been seeded one spot higher than their current seed. From an analytics perspective, our simulation doesn’t like Houston or Washington very much. On the opposite side, our simulation thinks Ohio State has a decent shot of making a small run from the 11-seed spot.

Gonzaga headlines a very interesting West bracket that includes some controversial entries in Arizona St and St. John’s. Also included in this bracket are the Mid-Majors, Nevada and Buffalo, who have a lot of hype, but haven’t been challenged often during the season. We think this is likely the bracket where we are most likely to see an upset in the first few rounds as there is a decent amount of parity from the 5-seed on to the 12-seed. 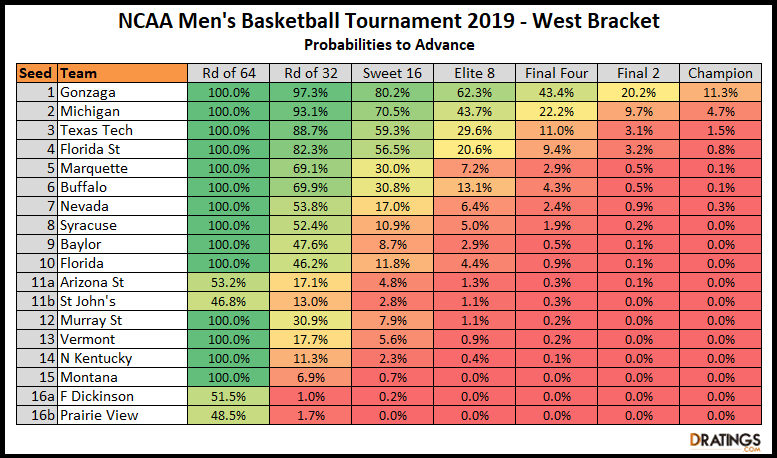