The announcement of USC and UCLA bolting to the Big Ten caused shock waves in conference realignment talks. Even though that move won’t take place for a while, there are movers and shakers every year and this year is no different. Here we will cover all of the conference changes that will affect the 2022-2023 FBS and FCS football conferences.

Though the big changes are still a few years off, there are a couple of changes that will happen this year. The big conference restructuring to note is that Conference USA will go from fourteen teams to eleven teams and drop divisions within the conference. There is one team, James Madision, that will make the jump from FCS to FBS this year. They are slated to join the Sun Belt along with three other teams from Conference USA. To even out the divisions, Troy will move from the Sun Belt East to the Sun Belt West.

Here is the full conference realignment list for FBS schools…

James Madison off to the FBS is clearly the most notable move in FCS, but there are some other movers that will change the landscape as well. The Atlantic Sun temporarily grows to six teams with the addition of Kennesaw State, North Alabama and Austin Peay. Jacksonville State is slated to go to the FBS next year and will thus be ineligible for post-season play. Lamar makes the move from the WAC to the Southland Conference. Southern Utah moves from the Big Sky to the WAC. Monmouth and Hampton attempt to fill the void left by James Madison by joining the Colonial Athletic Conference. Bryant goes from the Big South. And finally, there are three teams that make the transition from Division II to FCS football this year. First, Lindenwood will join the OVC Conference. Next, Stonehill will come in and join the NEC Conference. Lastly, Texas A&M Commerce makes the move and joins the Southland Conference.

Here is the full conference realignment list for FCS schools… 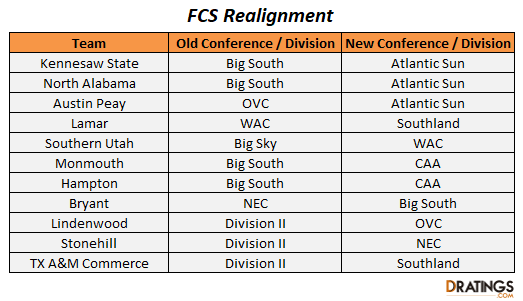