The 2022 college football season is set to kick off on August 27th, 2022 and it looks like this will be a much more stable year compared to last season. Though the big conference changing fireworks have already begun, many of the changes aren’t going to set in until future years. There are a few moves that are happening this season though and we cover them in a blog on 2022-2023 conference realignment.

Our breakdowns below show the projected conference record for every team in the NCAA FBS. We have ordered the conferences by strength-of-conference using a simple average of every team’s rating within in conference. Without further adieu, let’s dive into the conference projections. 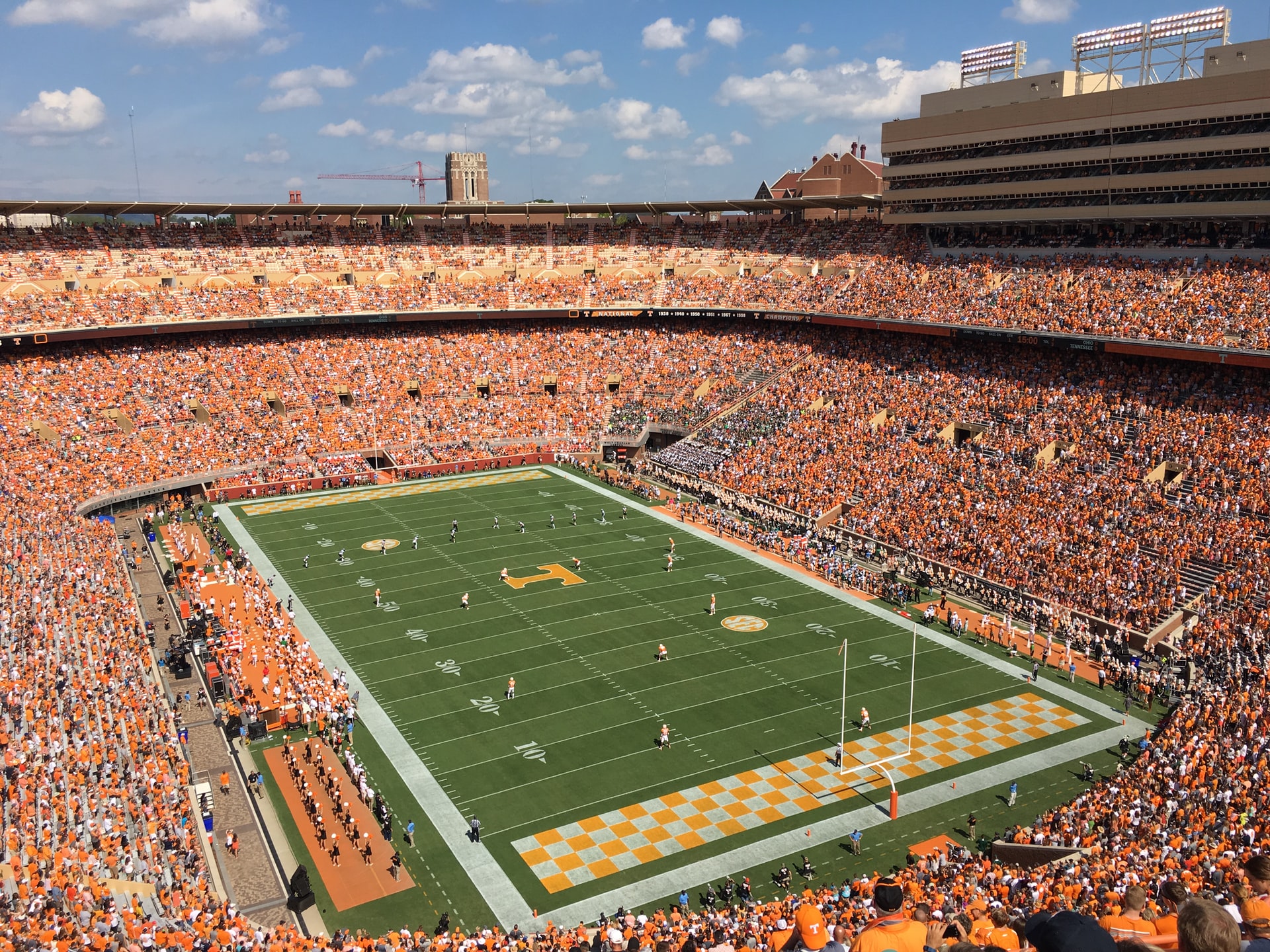 Photo by Steve DiMatteo on Unsplash

Look, we think the SEC is overall the stronger conference here, but from top-to-bottom the analytics say that the Big 12 is better. This is at least true until Oklahoma and Texas scamper off to the SEC. The Big 12 looks like a complete toss-up between the Longhorns and the Sooners! They match up in Dallas on October 8th and likely in the Big 12 Championship game in early December.

The SEC is once again expected to make some noise come the CFP National Championship.

The class of the SEC East is, once again, the Georgia Bulldogs. We have them projected to win just over seven games in the SEC with Tennessee projected in second place at just 4.3 wins. That said, it would be a total shock if anyone other than the Bulldogs came out of the SEC East. We also have them in our preseason CFP Playoff projection as the 4-seed.

Similarly to the SEC East, we see it as a one-team race in the SEC West. We project Alabama to win 6.8 games in the SEC which should easily bring them to the SEC title game. Texas A&M, Arkansas and Auburn are all projected to win more than 4 games in the conference and this appears to clearly be the best division in all of college football.

The Big Ten, led by Ohio State, continues to be a dominant conference and should put a team in the CFP Playoff.

The Big Ten East is clearly the stronger division of the two and are very powerful at the top with the Buckeyes, Wolverines and Nittany Lions. We have Ohio State winning 10.7 regular season games and 7.9 in conference as they are certainly the cream of the crop in the Big Ten.

The Big Ten West will be, perhaps, the most compeitive division in all of college football. There are five teams that we project will be within a game at the top of the division standings. It’s anyone’s guess as to who will come out of the West and that should make for some fun football!

The ACC is our fourth strongest conference again this year. We have Clemson projected to make the CFP Playoff in the #3 spot.

Clemson, is again, very good. However, one shouldn’t look past NC State, who are poised to have their best year in a very long time. Still, getting by the Tigers at Memorial Stadium on October 1st will be no small task.

The Coastal always seems to be a competitive division and it doesn’t look like that will change in the 2022-2023 season. Pittsburgh is our projected leader of the ACC Coastal, but we wouldn’t be surprised if Miami, Virginia or UNC was able to make the ACC Championship game.

The Pac-12 appears to be a little bit strong this year compared to prior years, but is still the weakest of the five power conferences.

It should be Oregon’s division to lose as they come into season with strongest team in the North. Washington, who was very disappointing last year, is projected to be the second best team in the Pac-12 North.

USC is getting a lot of love in Vegas, but time will tell if they are as good as they appear. We wouldn’t sleep on Utah giving the Trojans a good run for their money in the Pac-12 South.

With Desmond Ridder off to the NFL, we don’t expect UC to be nearly as strong as they were last year, but they are still the cream-of-the-crop in the American. Houston and UCF are expected to be strong challengers.

They aren’t technically a conference, but if they were then this would be the projected order of finish.

The MWC checks in as our eighth strongest conference.

Boise State doesn’t seem to be as strong as in year’s past, so this leaves the door open for Air Force or Utah State to take the Mountain division.

This seems to be a two horse race with Fresno State and San Diego State likely playing for a trip to the MWC Conference Championship.

The Sun Belt looks a lot different this year with four new teams and one team moving divisions.

Louisiana is again the top team in the, clearly weaker, Sun Belt West.

This division could be quite interesting this year. Appalachian State is the best team, but expect a challenge from Georgia State, Coastal Carolina, and newcomer James Madision.

Conference USA is down to eleven teams in the 2022-2023 season. We see it as a three team race between UAB, UTSA and WKU.

Finally, we come to the MAC, our last FBS conference!

The MAC West has six of the top seven teams in the entire conference according to our ratings.

Miami Ohio is the strongest team in the MAC East, but don’t sleep on Kent State to make run at the title game.