The brackets are set and for the first time we have 68 teams in the field vying for a chance to play in the Final Four. The play-in games start on Wednesday, March 16, 2022 and the second round games begin on the following Friday. We simulated the tournament 1,000 times to see who will end up playing in Minneapolis for a chance at the NCAA title. This is what we found…

The East appears to be the strongest bracket in the Women’s NCAA Tournament as they include both NC State and the UConn Huskies. What makes this such an interesting bracket is that the Sweet 16 and Elite Eight are playing in Bridgeport, Connecticut which gives a decent home-court advantage to the Huskies. The oddsmakers have UConn at -185 to go to the Final Four and NC State at +155. Our analytics still think NC State has the advantage – making the Final Four 44.8% of the time. Look out for Princeton to make a little bit of a run as an 11-seed. Our simulation has them going to the Sweet Sixteen 23.9% of the time. 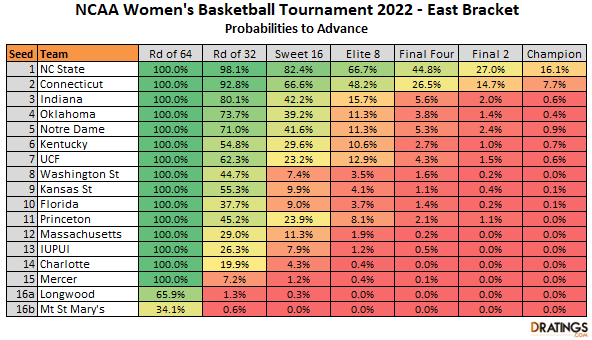 The West bracket is headlined by Stanford, who we have as our second best team in the entire Women’s NCAA Tournament field. Additionally, Texas is the co-headliner as the 2-seed and fifth best team in the tournament. As the third and fourth seed, LSU and Maryland are also very good teams that could make a run to the Final Four. Florida Gulf Coast, a 12-seed appears to be an underdog that can make a decent run through the tournament. We give them a 40% chance to beat Virginia Tech in their first match and a 15.5% chance to reach the Sweet Sixteen. 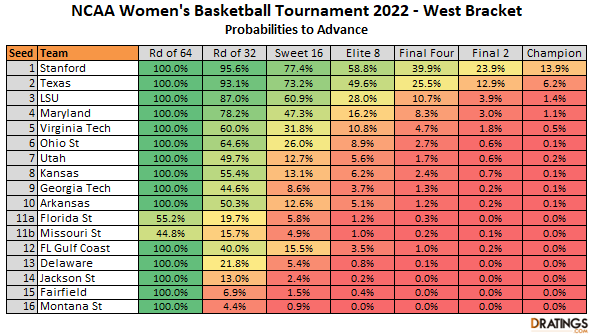 Like the East bracket, the South is a top heavy bracket that features two powerhouses in 2-seed Baylor and 1-seed Louisville. Our simulation gives Baylor the slight edge here, but the sportsbooks disagree. The latest lines have Louisville at -190 to make the Final Four, while Baylor is at +230. This would really make for a great Elite Eight match up. Additionally, Michigan, Tennessee and BYU all have around a 9% chance of making the Final Four. In conclusion, this really could end up being a very competitive bracket. 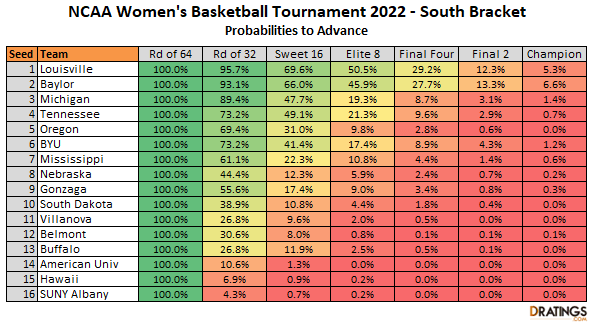 The Midwest bracket contains the number one overall seed in South Carolina who we give a 26.5% chance to win the entire tournament. It would be a little bit of a shock to see them get any resistance up through the Final Four. However, Iowa and Iowa State are both very capable of taking down the Gamecocks. North Carolina, at the 5-seed, appears to be a little bit better than advertised. They have a brutal bracket, but we could see them make a run if they can upset South Carolina. 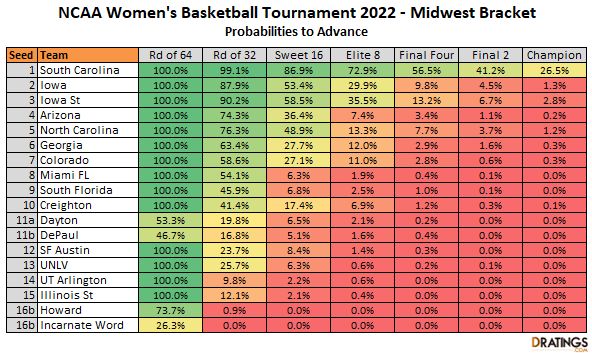