There is always a lot of debate as to whom has the best conference in college football. Usually, this debate involves a few beers with friends while sitting around and watching a football game. After digging into this a bit, I realized that there isn’t much in the way of analytical debate on this topic. Thus, I think it’s good to try and solve this problem with a little bit of math.

While there are an infinite number of wrong ways to solve this problem, there are thousands of, arguably, correct ways to solve it. I am focusing on two methods. Firstly, I will take a simple average of all the ratings (both FBS and FCS in every conference. There are a few reasons why I think this is the best approach. The main reason is that we are able to get a relatively accurate gauge on just how good every team is. Of course, this means that you have to trust that may ratings are solid. Hopefully, if you are here, then it means that you think that they are! The second model will take the average of the rank order for every team in Division 1. The obvious weakness here is that you don’t how much better the #1 team is compared to the #10 team or #20 team, and so on. This is still a decent method that should get us an accurate answer.

Now, we put the two methods to the test. Below are the results from the 2021-2022 college football season. 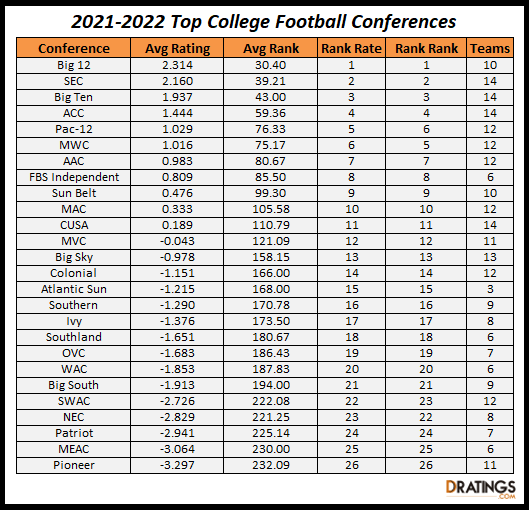 There were a few surprises here. First, the Big 12 beat out the SEC in both methods. Second, the two methods had almost identical results except with the Pac-12 and Mountain West Conference swapping places from one method to the other.

Some Discussion and Other Analysis

First and foremost, this is only one year’s worth of data. I plan on revisiting this post with more cumulative data in the following few years. I could have used past ratings, but until this year, my FBS and FCS ratings were independent and couldn’t be compared to each other.

There is another great conference comparison out there that runs into the problem of the FBS and FCS not being combined. Ken Massey collects and compares the college football rankings of most of the computer models in existence. He uses our second method (the rank order strategy) to find out how every model ranks each conference.