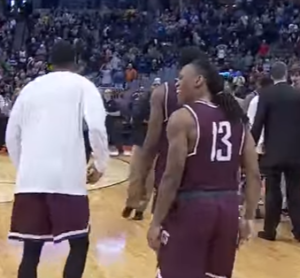 Much has been reported on Warren Buffett’s one billion dollar challenge to the person that can fill out their NCAA bracket correctly. A lot of numbers have been thrown around as to what are the true odds of going 63 for 63 on a bracket are.

In this post, we hope to get relatively close to the true odds and dispel some common mistakes that could throw the numbers off. It’s important to remember that the odds from year to year are never quite exactly the same as there are multiple factors that could affect the odds. The most significant factor is the parity of teams in each match. The closer in talent and ability that teams are to each other, the longer the odds are of picking a perfect bracket and vice versa. We did this experiment in 2014 and came up with odds of 1 in 46,112,373,957. This year’s odds will be much different.

So without further adieu, let’s kick this thing off.

This is easy! Every game is a coin flip.

Not quite. If every game were a coin flip, then the solution would be very simple. The answer would be one divided by 2 taken to the power of 63 which equals 1 in 9,223,372,036,854,780,000. In short, you have a better chance of being struck by lightning, twice, in the same night. It’s been widely reported by a bunch of web sites that these are the odds of picking a perfect bracket. Maybe journalists should stick to writing as we should stick to doing statistics. The flaw in that argument is that we know that every game isn’t exactly a coin flip, particularly in the early rounds. In fact, in some games (think 1 vs. 16 seeds), one team will have higher than a 90% chance of winning. This greatly sways the odds into our favor.

So, if every game isn’t a coin flip, then how in the world are we going to test this?

Let’s start with the basics! There are a couple of assumptions that we have to make to determine the true odds of predicting a perfect NCAA bracket. This isn’t perfect by any stretch of the imagination, but the idea is to get as close as possible.

Assuming that the favorites win the play-in games, this is what our bracket looks like…

With the match ups set, what is the probability of predicting the second round?

This is actually easier then you might imagine. The table is a list of all the second round matches with a probability of the favorite winning. Note that the first round matches are now deemed the play-in games.

The lower seeds that have a higher likelihood of winning are listed in green below. Note that the higher seed isn’t always technically the “favorite” to win the game.

When we actually multiply all of these probabilities together, we find that there is a 0.010% (a 1 in 9,843) chance this year of predicting the 2nd round perfectly. When we computed the probabilities back in 2014, we found that we have a 0.016% chance of going 32 for 32 if we pick all the favorites. This amounts to a probability of 1 in 6,102 of making this prediction. While this is still highly unlikely, it surely doesn’t fall too far outside the realm of possibility.

Standing by our strategy of only picking the favorites, here are the probabilities of all the favorites winning in Round 3.

Now things are beginning to get dicey. By itself, if you somehow managed to correctly pick the favorites correctly in the 2nd round, then you have a 0.11% chance to correctly pick the 3rd round. By continuing to multiply the numbers out, we are now have a 1 in 8,870,000 chance of calling the bracket right up to this point.

Now that your bracket is busted…

We’ve combined the final three tables into this last section. The games in these rounds are much tighter, and thus, much closer to that of a flip of the coin.

After the Sweet 16, the odds of continuing to have a perfect bracket is 1 in 513 million.

After the Elite 8, the odds of continuing to have a perfect bracket is 1 in 5.7 billion.

The final tally after we multiply up all the probabilities of the 63 games gives us just a 1 in 29,714,235,795 chance of predicting a perfect NCAA bracket. Remember that our conclusion in 2014 was that the odds of picking a perfect NCAA Bracket were 1 in 46,112,373,957. It’s safe to say that in any given year the odds on this can change by tens of billions!