We are back for another year of March Madness with our 2018 NCAA Tournament breakdown! We ran 1,000 simulations on the tournament to help us determine who will be crowned National Champion. As always, you can find our individual game predictions here. Now, to the good stuff.

It’s been a wild ride so far in the 2018 Men’s NCAA Tournament. We’ve seen 16-seed UMBC beat up on top-seeded Virginia as well as four of the top eight teams get beat. Now that the Sweet Sixteen is in focus, we ran the numbers again to see how the tournament will shake up. 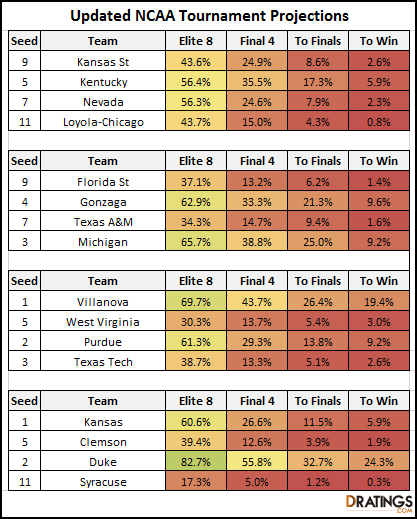 Based on our simulation, Duke is now the odds on favorite to win the tournament at 24.3%, with Villanova close behind at 19.4%.

The first thing of note is that our simulation likes Villanova to be National Champions. Our simulation crowned them as champs 17.9% of the time, which is higher than any other team. It certainly seems like they have the easiest bracket of the bunch. The two lower seeds to watch out for appear to be 6-seed Florida and 10-seed Butler who both look poised to upset a few teams in this tournament. 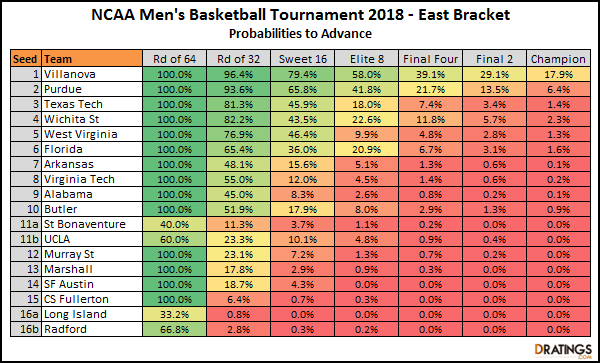 This bracket looks like it could be interesting in the Second Round as the Miami vs. Loyola, Creighton vs. Kansas St, and Nevada vs. Texas games should all be very close. That said, the South is completely Virginia’s to lose and we give them a 37.4% chance to make the Final Four. We’d actually be quite surprised if there were any big surprises coming out of the South. 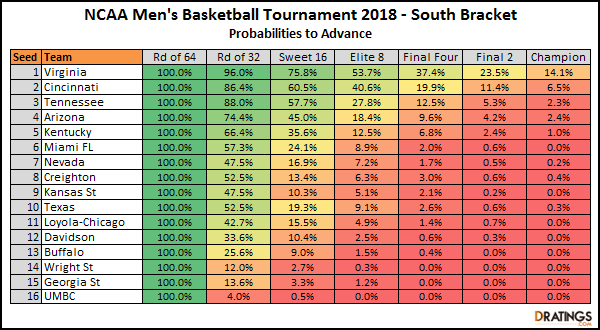 The Midwest Bracket looks completely fascinating in that the top-seeded Jayhawks are only the third most likely team to make the Final Four out of the bunch. In what is undoubtedly the toughest bracket of the four, Kansas will have to maneuver Duke, Michigan State, and Auburn to advance to San Antonio. While we are hardly calling for an upset here, Penn is the strongest 16-seed in recent memory. Also, if one is going to shoot for the stars on an underdog, we really like New Mexico State. 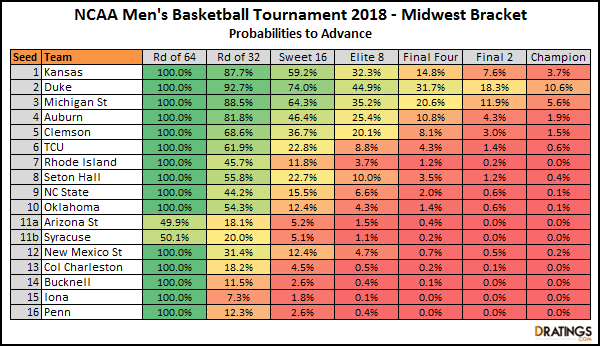 The West is another bracket that looks completely wide open. The top four seeds all have a 13% chance or better to reach the Final Four, and Ohio State isn’t far behind at 9.8%. North Carolina is the small favorite to win the group and get the invite to the Final Four. 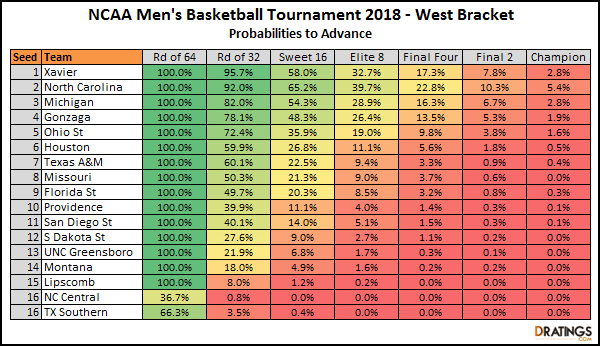