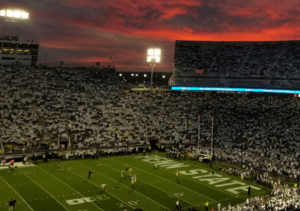 As July comes to a close, the excitement for the college football season starts to rise! This is our fifth annual Preseason College Football Conference Predictions! For those who are not familiar with how we do things, our projected standings are based on simulations of the season. We take our power ratings for each team and do a simulation on every team’s schedule.

More information on our NCAA Football FBS ratings can be found here!

The SEC is once again projected to be the best conference in college football for the 2019-2020 season. Per our preseason ratings, eight SEC teams fill out our top-20.

At this point, we feel like we can just copy and paste Alabama into the top of the SEC West. Projecting two through five in the SEC West isn’t nearly as easy. Between LSU, Texas A&M, Auburn and Mississippi State, any of them are capable of finishing second. We expect Ole Miss and Arkansas to get beat up on a bit this year.

Georgia is again on top of the SEC East, but expect a much improved Gator team to challenge the Bulldogs in Jacksonville this year. Expect Missouri to be as good as last year, behind quarterback transfer Kelly Bryant. Kentucky shouldn’t be anywhere near as good as their 10-3 campaign, but they should play some competitive games.

The Big 12 Conference jumps to our preseason #2 ranked conference from #4 at the beginning of last year.

The Big 12 looks like a two horse race with the Sooners and Longhorns possibly playing for the conference in Dallas on October 12th. Outside of Kansas (who are likely to finish last), the rest of the Big 12 appears to be completely up for grabs.

With a huge part of their offense back, including Trevor Lawrence, it should be no surprise that Clemson is the best team in the ACC.

Clemson should easily be at the top of the Atlantic and Louisville will struggle to get out of the basement of the conferece. The rest of the ACC Atlantic should be very competitive as any of the teams between our projected #2 and #6 could surprise.

After years of not living up to their reputation, it finally looks like the Hurricanes are back. We don’t really think that they have the talent to compete for the ACC Conference Championship, but they are favorites to win the Coastal.

From top-to-bottom the Big Ten drops off from our #2 conference to our #4 conferece, but there should be a lot more parity and exciting games!

Is this the year that the Wolverines finally take down the Buckeyes from their perch at the top of the Big Tean East? Our projections have both teams with the exact same conference record (down to one decimal point). Michigan getting the Buckeyes at home could be the deciding factor.

The Big Ten West is always a competitive division, but this year looks to be particularly exciting. From our projections, the top five teams in the West are all projected to be within 0.3 wins of each other! So this one is completely up in the air!

The Pac-12, again, comes in as the weakest of the Power 5 conferences.

The Huskies are poised for another strong season after finishing off a 10-4 campaign last year. They play their toughest competition, Oregon, at home on October 19th which could determine the Pac-12 North.

Utah returns a lot of starters and are our favorite to win the Pac-12 South. One can never sleep on the Trojans of USC and Arizona State shocked some people last season so there is no reason they can’t shock again this year.

Is it UCF’s year to make another BCS bowl game, or is someone else ready to step up and challenge them?

UCF looks like the strongest team, but so much of that will depend on their quarterback question marks. The Bearcats may be better than advertised as Desmond Ridder looks to have a breakout year.

The AAC West is looking to be between Memphis and Houston. Houston does get Memphis at home, but has a tough out of division game against UCF.

The Mountain West Conference checks in at number eight in conference strength.

Following up on a 10-3 year, Boise State is again poised to take home the MWC Mountain division. Air Force and Utah State are in the mix with an outside shot to take down Broncos.

San Diego State and Fresno State should, again, be neck and neck trying to finish in the top spot of the MWC West.

Starting the season, Conference USA is listed as our top-to-bottom #9 rated conference.

FAU, Marshall and FIU are all projected within 0.5 conference wins so CUSA should be a competitive one to the finish.

The bottom three in CUSA West will struggle to compete, but the top four are all relatively strong. North Texas is the slight favorite, but don’t sleep on Southern Miss, Louisiana Tech or UAB.

The Sun Belt Conference is our 10th strongest conference to start the season.

Appalachian State has some tough out of conference games, but they should blow through the Sun Belt East.

We have the Mid-American Conference listed as our weakest conference in this year’s preseason ratings.

Frank Solich is still with Ohio University, and looking to bring in another strong season.

We project Toledo to win the MAC West, but they will face stiff competition from Northern Illinois, Western Michigan and Eastern Michigan.