What Methods Will We Use

Similarly to college football I will again focus on two methods. Firstly, I will take a simple average of all the ratings which can be found at here. This, I believe, is the best approach as it treats every team evenly within the conference. For the second approach, we will take the average of the rank order for every team in Division 1. While the first approach is better, this is still a decent method that should get us a very similar answer.

Here are the results from the 2021-2022 college basketball season using our both rating methods. 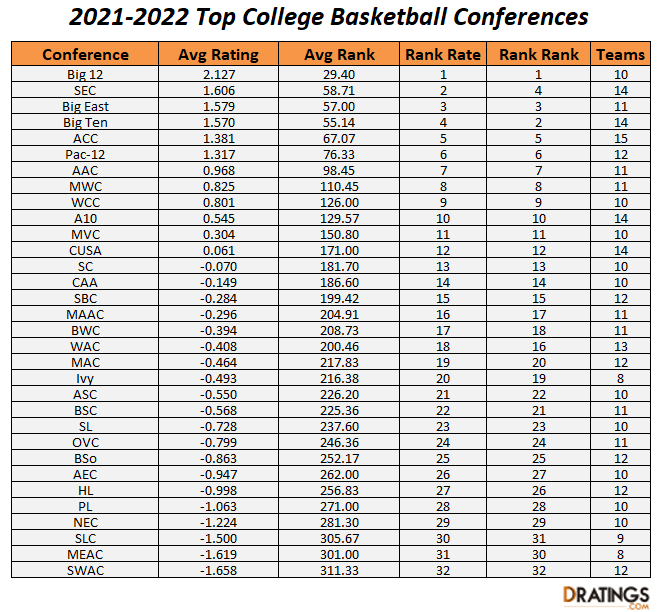 It is no surprise that the Big 12 was far and away the best conference in college basketball this year. Interestingly, the SEC, Big East and Big Ten were all very close in both analytic systems. The Atlantic Coast Conference followed in fifth place with the Pac-12 falling behind it in sixth.

Discussion and Other Analysis

The Massey Composite is another superb reference to check when analyzing top conferences. He takes the average rank order from every college basketball ranking system on the internet and combines it into one table. This year, there was unanimous agreement that the Big 12 was the top conference in college basketball. About half of the entries have the Big Ten as the 2nd best conference. Further, there was a lot of disagreement as to which conference is stronger between the SEC and the Big East. In the composite, the Big East did win out by a fraction.