By now, everyone has had a chance to digest the magical run that St. Peter’s had in this year’s NCAA Tournament. Never before in the tournament’s history have we seen a 15-seed make the Elite Eight. This begs the question: What were the chances of this happening? Further, what was the chance that St. Peter’s could have won the entire tournament? We broke this all down using a few different methods below.

In our March Madness Preview, we simulated the NCAA Tournament 1,000 times. This takes into account all of the teams’ ratings and simulates the tournament to give a pretty accurate representation of what would happen by chance. 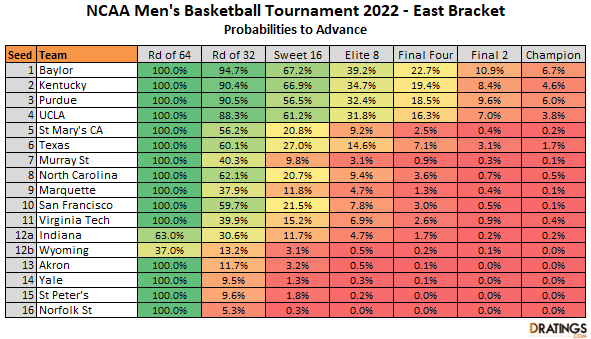 In 1,000 simulations, St. Peter’s made the Elite Eight twice. Consequently, by this method, they had about a 1 in 500 chance of making it to that point.

Analysis From the Sportsbooks

Another way to analyze this is to go and look at the money line odds for St. Peter’s in each game that they played in.

Though this doesn’t include the vig (which would make their odds slightly worse), we also find here that the Peacocks had about a 1 in 500 chance to make the Elite Eight. Our simulation didn’t go deep enough to find their probability of making the Final Four, but this does. That probability would have been around 1 in 2,500.

Could the Peacocks Have Won the NCAA Tournament?

This would have been a very extreme long shot. It’s probably fair to say that St. Peter’s would have been around a +500 underdog to Duke and also to whomever they played in the National Championship (Villanova or Kansas). Using these odds, we give them a 0.0016% chance of winning the NCAA Tournament. This equates to about 1 in 64,000 chance. While this run was quite a fun thing to watch, I wouldn’t bet on a 15-seed winning the NCAA Tournament anytime soon.