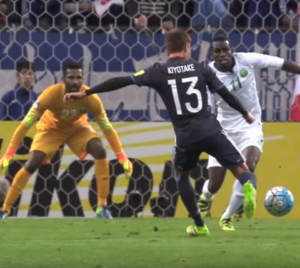 The Asian Football Confederation (AFC) is made up of 46 members and has been allotted 4.5 spots (4 automatic, 1 spot by way of inter-confederation playoffs) for the World Cup in Russia. The qualifying tournament is broken into four rounds:

Round One: Played in March of 2015, the twelve teams ranked at the bottom of the FIFA rankings play in a two-leg match to determine who advances to the 2nd Round.

Round Two: Played from June 2015 to March 2016. Includes the six winners from Round 1 and the other 34 teams in the confederation. The teams are broken up into eight groups of five teams and they play in a home-and-away round-robin format. The winners of each group and the four best runner up teams move on to the 3rd Round.

Round Four: A home-and-away pitting the two 3rd place finishers from Round 3. These games will be played on October 5th and October 10th, 2017. The winner will move on to the inter-confederation playoffs against the 4th place team from CONCACAF.

We simulated all of the games 5,000 times. For our individual game projections, see: World Cup Game Predictions. For all current rankings of all FIFA International Clubs, see: International Soccer Rankings.

#All ten games have been played in the qualifying group.

*The odds to “Advance” above is the probability to advance by finishing either in the top 2 of the group or by way of the inter-confederation playoffs against the CONCACAF 4th place winner.