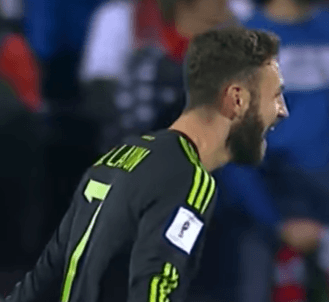 In it’s current format, CONCACAF has 35 members which are vying for four World Cup spots. With the four previous rounds being played, 29 teams have been weeded out and the fifth round of CONCACAF qualifying consists of six teams. These six teams play a home-and-away with every other team in the “Hex” for a total of ten games. These games are played from November of 2016 and run until October of 2017 during international dates on the FIFA calendar.

The top three teams at the end of the “Hex” will advance to the 2018 World Cup. In a somewhat unique twist, the team that finishes fourth in the table will then advance to the inter-confederation playoffs. This consists of a two leg home-and-away match up with the fifth place team from the AFC to determine who advances to the World Cup.

We simulated all of the games 5,000 times. For our individual game projections, see: World Cup Game Predictions. For all current rankings of all FIFA International Clubs, see: International Soccer Rankings.

#Nine games out of ten have been played in the Hexagonal. The tenth game is on October 10th. The above table is sorted by projection, not actual results.

*The odds to “Advance” above is the probability to advance by finishing either in the top 3 of the group or by way of the inter-confederation playoffs against the AFC 5th place winner. As a reminder, the CONCACAF 4th place finisher plays in a home-and-away playoff versus a team from the AFC confederation.

Probability to Advance Over Time